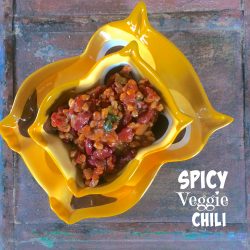 Remember 2 Mondays ago when Ohio State shocked the world and won the National Championship? That same night, I shocked the world (of Texas) with an amazing chili recipe– with NO meat! Texans tend to get pretty squirrely when you mention taking the meat out of something… so I just don’t mention it. I let…   Read More» 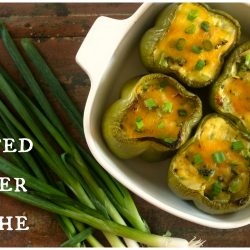 I reallllly don’t like making my own crust. Anyone with me on this? Breakfast for dinner is supposed to be easy! Healthy store-bought crust is pretty much non-existent, so why not forgo the crust altogether and stuff it in a pepper? Think of your favorite omelet, whisk the ingredients together, throw it in the pepper and…   Read More» 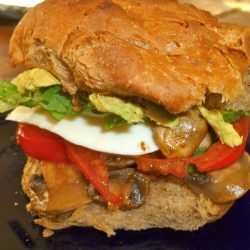 Looks can be deceiving. Despite resembling a greasy high-fat burger, this is actually a very healthy veggie sandwich. The best veggie sandwich you’ve ever had. I call it indulgence on a diet. Toasted Caprese Slamwich Prep Time: 10-15 minutes. Serves 4 10 oz sliced mushrooms 1/2 of a small onion, sliced 4 tablespoons balsamic vinaigrette 2…   Read More»