What’s in my Wine?! The Real Reason You Have a Hangover… 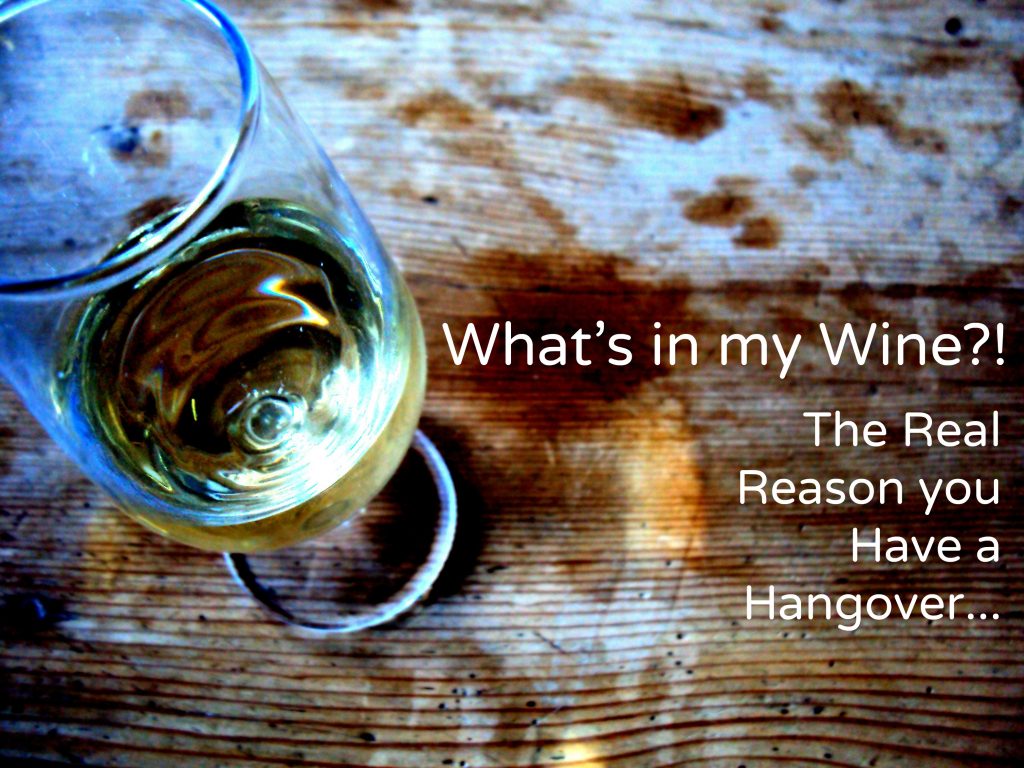 Most people are aware that what you eat has a major effect on how you feel, your mood, your energy levels, and your weight. We’re all trying to avoid processed food and check labels for sketchy ingredients. We’ve started shopping at local farmers markets and asking how and where our food was grown.

So why aren’t we doing this with what we are drinking? Have you ever even noticed that wine doesn’t have an ingredient label OR a nutrition facts label?

Before doing my research, like most people, I thought wine was just fermented grape juice and maybe some added sugar. Why would they need to add anything else? Well, it’s the same reason why there’s high fructose corn syrup in your ketchup. Adding chemicals, additives, and fillers to wine is a cheap way to produce mass quantities that are pleasing to the eye and palate.

So what is in your wine?

Let’s start with the vineyard and how the grapes are grown. Unless you’re searching out biodynamic or organic wine, you are definitely being exposed to pesticides that are not fully removed in the winemaking process. In 2008, The Pesticide Action Network Europe (PAN Europe), obtained 40 bottles of wine and tested them for pesticide residue. One hundred percent of the wines tested positive for pesticides. One wine had 10 different pesticides, while the average was four. Five of the 24 pesticides found were classified as carcinogenic, mutagenic, reprotoxic, or endocrine disruptive by the European Union.

After coming off the vine, coloring agents like Mega Purple and Ultra Red can be added to enhance the color of wine and give it a “fruitier” flavor. For winemakers looking to add an oaky flavor but aren’t willing to pay the high price for oak barrels, they’ll add toasted oak chips or oak extract to stainless steel barrels. Winemakers can also use thickening agents like gelatin, preservatives like sulfur, sterilizing agents, and flavoring agents like tannins, isinglass, and tartaric acid. A quick search for wine additives for sale on a Midwest Supplies website brought up things like sparkalloid, sodium metabisulfite, “acid blend,” LQ Chitosan, and glycerin.

Basically, you have no idea what you’re drinking. If winemakers had to disclose everything they were adding on a label, they would probably change some of their practices. Right now they aren’t inclined to do so because using additives implies that their grapes or wines are less than superior. Winemakers aren’t required to list their ingredients because alcohol is regulated under a different governmental agency than food. While the Food & Drug Administration (FDA) requires nutrition and ingredient labels, the Department of the Treasury’s Alcohol and Tobacco Tax and Trade Bureau (TTB) does not. Just think if your food didn’t have to have an ingredient label. People would be freaking out!

So since the ingredients in wine aren’t listed on the label, so what can you do?

Natural wines have existed for thousands of years and are finally making a comeback. Winemakers are starting to turn their backs on the world of yeast packets, reverse osmosis, powders and potions. Wine drinkers are sick of the mass-produced, overly- sweet, over-manipulated wines and want to drink a wine free of chemicals and additives to savor with their unpasteurized cheese.

The guiding philosophy of natural wine is nothing added and nothing taken away. The wine drinker is able to experience the “terroir” of the wine, the characteristic taste and flavor imparted by the environment in which it is was grown. The natural wine movement is being led by France, with Italy close behind. The U.S. has been slow to catch up, however there are new natural wine producers and wine bars or shops specializing in natural wine popping up all over the country, like Terroir in San Francisco and The Natural Wine Company in New York City.

That being said, finding natural wines is still no easy task. Ask someone at your local liquor store to point you to a natural wine and you might be able to find one or two bottles. The word “natural” is not a legally defined term and most natural wines aren’t going to say so on the label. Take note that an organic wine does not mean that it is natural, only that there were no pesticides used on the grapes. That doesn’t mean that other additives weren’t used in the rest of the winemaking process. However, under the USDA National Organic Program, added sulfites are considered a synthetic food additive and are not allowed in organic wines made in the U.S., so if you can only find organic, that’s still your best bet.

Frey Vineyards out of Northern California has been the easiest (and reasonably priced at $20-30 per bottle) brand for me to find at a chain like Total Wine. They produce natural, organic wines without added sulfites. To find a natural wine near you, go to a locally owned wine shop and talk to the owner. And just like at the farmer’s market, don’t be afraid to ask questions! If you’re local to Orlando, Andres Montoya of The Wine Barn (now under new ownership as Vines and Forks) in Winter Park helped me to find plenty of natural wines to try.

Natural wines are something we all need to be talking about. As a dietitian, I know how much people care about what goes into their food. The concept of “voting with your fork” has become common. Let’s also start voting with our wine glass and let winemakers, producers, and sellers know that we care what’s going into our wines.

This is the first in a series of posts about natural wines. I’ll also be covering:

Are there any other questions or topics surrounding wine that you’d like to learn more about?

Asimov, Eric. If Only the Grapes Were the Whole Story. The New York Times, 2013.