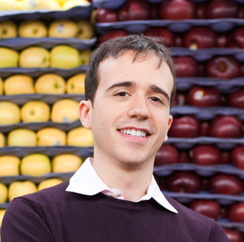 Andy Bellatti believes in helping others achieve better health through food and educating the public on nutritional knowledge that is not corrupted by the food industry. He is the entrepreneur behind Andy Bellatti Nutrition and the co-founder of Dietitians for Professional Integrity. His blog Small Bites is research-driven, focusing on popular, sometimes controversial nutrition topics and the science behind them. The popularity of Small Bites has given Andy a voice in the media. He has made several TV appearances and contributed to the Huffington Post, Civil Eats, and many more! Read on to learn more about Andy’s view on “diet” and his passion to engage vocally with the food industry.

What first piqued your interest in nutrition?

When I was a sophomore in college (majoring in journalism), I took a Nutrition 101 course as an elective. Looking back, that initial course planted that initial seed. Two years later, I watched Morgan Spurlock’s “Supersize Me”, and the way that movie wove together issues of nutrition, public health, and food politics captured my attention. In fact, it was after watching that documentary that I considered going back to school to get my graduate degree in nutrition.

What does a typical day in the life of Andy Bellatti look like?

A typical workday has me in the corporate wellness setting (I am employed as a health coach), coaching anywhere from six to twelve clients a day. Throughout the day, I also like to stay on top of nutrition news and developments. Some of the sites I visit frequently include Marion Nestle’s blog, Civil Eats, Mother Jones, Food Navigator, and the Union of Concerned Scientists.

Have you seen different nutrition habits from living in South America and North America? Are there nutritional practices from South America that should be incorporated in the U.S.?

I was born in Argentina in 1982 and lived there until 1990. I was in Venezuela from 1994 to 1997, and then again in Argentina from 1997 to 2000. Between 2000 and 2011, I traveled to Argentina to visit family once or twice a year. Much like the Standard American Diet, the Argentine diet is very high in red meat, which is not good. And, while in today’s globalized world fast food chains and junky snacks by large multinationals are everywhere, I think Argentina places more value on home-cooked meals, which is a plus.

I really dislike the word “diet”. It implies deprivation, sacrifice, and something you “go on”. I have been vegan since 2011, but I think it is more accurate to say that, over time, I gained an appreciation for whole, plant-based foods. For instance, when I first eschewed meat in the late ‘90s, I was still eating plenty of highly processed foods: Pop-Tarts, soy chicken nuggets, etc.

If you could make one fad diet disappear, which one would it be and why?

I would make the general concept of “cleansing” disappear. It doesn’t consider the big picture. Subsisting on juice for three or five days accomplishes nothing if your general eating habits are poor. It also does an injustice to the thousands of solid foods that are healthful and delicious. It’s problematic when foods like avocados, chickpeas, sunflower seeds, walnuts, and fruits and vegetables in solid form are characterized as “not healthful”.

What has been your favorite experience as an RD?

Hands down, seeing the many changes that can happen when people focus on incorporating healthy habits and commit to them. My most successful clients have been the ones who, over time, eat fewer processed foods, ditch sugar-sweetened beverages, and get out of the harmful “diet” mentality.

What is a common nutrition misconception you see most often?

As a co-founder and strategic director of Dietitians for Professional Integrity, what goals do you plan to accomplish for the organization?

We advocate for more responsible, ethical, and relevant sponsorship within the Academy of Nutrition and Dietetics. Part of our work involves raising awareness, educating others on the issues, and serving as a go-to news source for those who want to learn more about why health organizations partnering with the likes of Coca-Cola, PepsiCo, and General Mills is problematic. AND is not the only organization engaging in these relationships; but, as RDs, it is the organization we belong to and the one we have the best chance of changing.

Where do you stand on GMO’s?

The conversation on GMOs has become extremely polarized. It has now basically boiled down to a screaming match, where one side accuses the other of being “shills”, and the other side labels anyone with any concerns about GMOs as “anti-science.” As long as that continues, you can’t expect much in the way of nuanced conversation. All those labels do is put people on the defensive.

It would certainly help if those with concerns about GMOs stay away from fear-mongering hyperbolic messaging and flawed studies that have been called into question, and if those who staunchly defend GMOs recognize that there are legitimate reasons to be concerned about the impact these crops can have on ecosystems.

What frustrates me about the current debate is that two very important factors — the social justice piece and the ‘increasing corporate control/monopoly of the food supply’ piece — are often ignored.

And, when it comes to “feeding the world,” we need to address the issue of food waste, which is absolutely out of control. The United States alone throws out $165 billion worth of food each year, and there is plenty of perfectly edible produce that never makes it to market because it is deemed “too ugly”.

Also, we can’t forget other important conversations we need to be having when it comes to agriculture, such as no-till farming, human rights issues in relation to farmworkers (especially migrant farmworkers), and the adverse effects of monocropping.

How do you recommend current RDs and future RDs challenge the deceptive food industry?

The best way to challenge the deceptive food industry is to be an informed advocate. In order to be informed, you need to be well-read, keep up with news, engage in dialogue with thought leaders and with those who see the issue differently from you, and be willing to take a stand.

Thank you Andy for being part of this week’s Dietitian Spotlight Series.