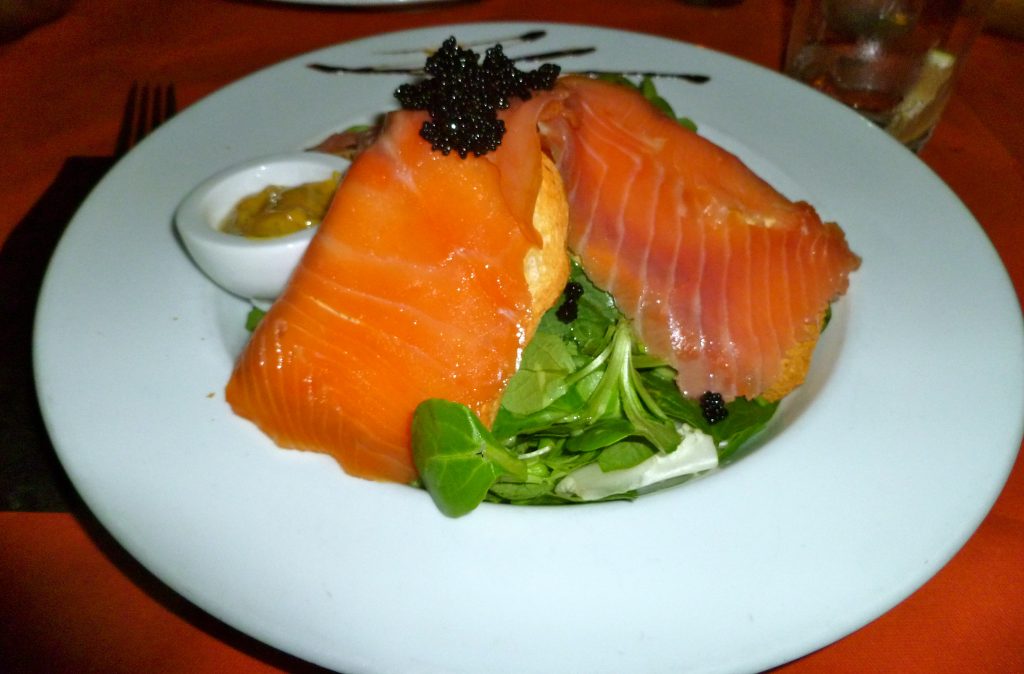 An amazing salmon salad I had at one of the restaurants along the beach in Malaga, Spain.

Salmon is one of the best sources of omega-3 fatty acids out there. A diet rich in omega 3’s supports heart health and may reduce your risk of Alzheimer’s and dementia. The American Heart Association recommends eating fish twice a week, preferably salmon and other fatty fish such as mackerel, albacore tuna, lake trout, herring and sardines. With American Heart Month coming up (February), there’s no better time to start this habit than now.

So now that you’re convinced you should be eating salmon, what should you buy? There are lot’s of options, from fresh to canned, farm-raised vs. wild and Atlantic vs. Alaskan. Are they really all that different?

Environmentally, wild Alaskan salmon is your best choice. According to fishing sites like reelchase.com, Alaskan salmon fishing is regulated to continue to ensure a healthy salmon population. Wild salmon populations in the Pacific Northwest (Oregon, California, and Washington) are also moderately healthy according to Monterey Bay Aquarium’s Seafood Watch report. Avoid buying wild Atlantic salmon, as the population has been severely depleted. If you’re still not sure, look for the consumer eco-label certified by the Marine Stewardship Council.

That being said, most of the fish we consume in the US, whether from restaurants or grocery stores, is farm-raised. Fish farming practices are questionable in some areas of the world, where the waters could be polluted with antibiotics and waste, creating conditions that are conducive to contagious disease and parasites. Most farm-raised salmon are kept in pens or cages near costal areas where wild salmon migrate, which poses a threat to the wild salmon population. However, efforts have been made in the US to alleviate this problem by raising fish in closed system inland tanks. Still, the amount of food and resources it takes to grow farm-raised salmon is triple the amount of wild. This is a growing concern as global production of farm-raised salmon continues to rise.

To combat this problem, there is a new salmon being developed called AquaBounty salmon, a genetically modified salmon which has not been approved by the FDA as of yet. This farm-raised salmon is genetically modified to grow twice as fast and consume fewer resources. I say skip the mutant fish and stick with what nature gave us.

Let’s not forget canned salmon, which is a great way to get your omega-3’s when you can’t find fresh, environmentally friendly salmon or you just want to save a few bucks. Most canned varieties are Alaskan wild.

Now that you’re better informed on what to buy, how about a recipe? 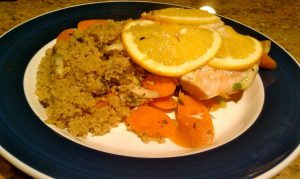 To be honest, I wasn’t always a big fan of salmon. Now I know the problem was, I’d never had a good quality piece of salmon cooked properly. The salmon teriyaki skewers at Applebee’s aren’t exactly a good salmon dish to start out with. This is the first recipe that made me realize that I did, in fact, enjoy salmon. 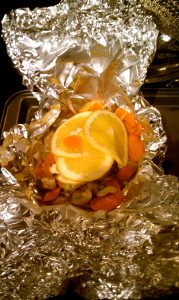 2. Tear off four 2x2ft pieces of aluminum foil. Fold each in half and divide the vegetables evenly in the center of each piece. Divide fish into four pieces and place on top of veggies. Drizzle one tsp olive oil over each piece and top with orange slices. Fold the ends of the foil inward and roll down, creating an enclosed packet.

3. Place foil packets on a baking pan and bake for about 30 minutes or until fish flakes with a fork and carrots are tender. Enjoy!